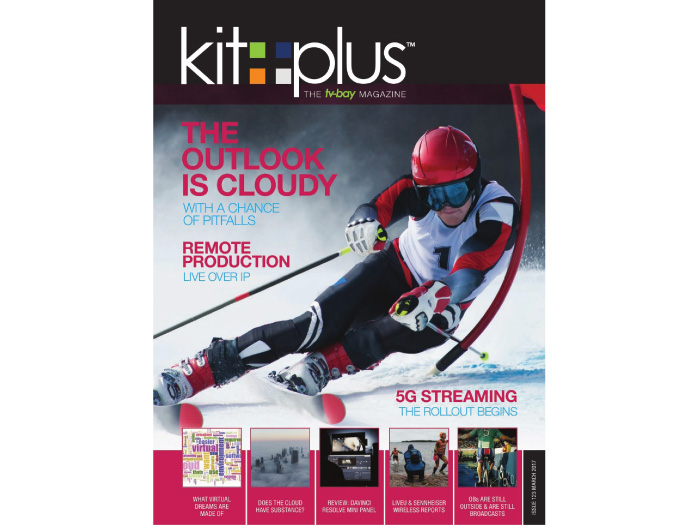 Article: OB’s are still outside, and are still broadcasts - KitPlus March 2017

With the advent of new and emerging technologies, and with the one getting the most oxygen at the moment being video over IP, a number of people are asking whether the ability to move control rather further way from an event has, or will, change the nature of OB production.

With the advent of new and emerging technologies, and with the one getting the most oxygen at the moment being video over IP, a number of people are asking whether the ability to move control rather further way from an event has, or will, change the nature of OB production.

OB requirements always depend on what type of broadcast you’re talking about. Whether it be sport, news, or live events; the technical requirements are largely a function of size and location. There are myriad variables that determine what is most appropriate for each situation in terms of technology, but the bottom line, is this - there’s not currently a lot of change in OB requirements.

That’s because, for major events in sport, most broadcasters still want to cover it live and, importantly, on site. Remote production over IP, which many are rightly talking about, has its place and will continue to grow but is, in my view, not quite ready yet for major events.

Notice I said “major” events. Remote production, which is already taking place, is actually an ideal production option for more niche or minority interests. Lots of such special events occur throughout the UK and Europe and I can easily see many of them increasingly being covered on a remote production basis. That approach is contingent on having the right kind of connectivity available, whether satellite or fibre. The availability of suitable fibre-based connectivity is less advanced in some areas than others, but where it is available, it’s a highly compelling option.

Although remote production still has issues to be resolved, a lot of people are looking into it with great interest, predominantly as a way of reducing costs while still giving them the leverage to produce the amount of content they need to fill an increasing number of, for example, 24-hour sports channels. However, it’s not quite a viable proposition for major events just yet, and here’s why.

It will be quite a while before we see, for example, a major sporting event that doesn’t have six or seven trucks sitting outside. Although there are obvious advantages to IP-based production, what a lot of people are forgetting is that it could in some cases come at the expense of the feel of a “live” event. Remote production, almost by the term’s very definition, suggests a vague notion of detachment. There is subtle, sometimes overt emotion associated with big events and a “feel” that most viewers at home (or on a tablet or mobile these days) miss when it’s not there, even if they can’t quite put their finger on what’s missing. It, in short, “just doesn’t feel right”.

Presenters, cameramen, directors and crew are professionals, but they’re human beings, too. Very few are able to stay utterly detached when they are live, in the moment. It shows through in the production. The excitement, drama - the human element, if you will - at least for major events, can potentially be diminished if produced largely from afar.

Don’t misunderstand. Remote production over IP has huge potential for introducing monumental changes, for the better, in terms of providing more ingenious types of coverage at a lower cost. However, from our point of view, the production approach doesn’t matter all that much. Whichever avenue you choose, you need cameras, lenses, tripods, pedestals and all the rest. Your method of getting the images and audio captured by those devices back to an OB or studio is entirely up to you and your situation.

But enough of the theorising, back to the technology. We are already seeing significant advances in, and the increased deployment of, RF, in particular more Mesh products to provide what I call “smarter” coverage. By smarter I mean, with a Mesh system you can start at “A” and complete an entire production right through to “Z”, as opposed to “A” to “F”. Stop. Move some equipment. Then do “F” to “M”. Stop. Move equipment again, and so on. New RF products can offer continual coverage and are increasingly being deployed as a technology of choice for OB productions large or small.

The only reservation I have in terms of RF and Mesh products is that the ability to transmit in 4K has yet to emerge. So far, I’ve not seen any product from any manufacturer that can genuinely deliver ultra-low latency 4K transmission, and I suspect it may still be some way off.

There are other ways to achieve low latency transmission, and new technologies will probably arrive before existing ones can adapt, but the bottom line is that the ability to transmit low-latency 4K has to happen. It’s not there yet, but that’s not to say it won’t be in 12 months’ time.

Modern production standards notwithstanding, in recent weeks we’ve nevertheless embarked on a significant investment in new stock, but much of it is a replenishment and extension of technology that our customers expect us to have on hand and for which demand, if anything, is increasing. However, we are also investing in more HD cameras because we have a huge demand for them, as well as 4K cameras and associated lenses for those who want to take it a step further.

Having said all of the above, it’s fair to say there haven’t been major tectonic shifts in terms of OB technology requirements in recent years, and that continues to be the case, at least in the near-term. In my view, the reason for this is two-fold, a lack of standardisation, i.e., a number of broadcast and production standards are still being worked out, particularly in terms of UHD and HDR. Although neither are particularly new anymore, both are necessary for high-end production and the relevant standards still need to be agreed and ratified. Standardisation is getting close, it’s there but not quite there yet. That leads to delays in manufacturing and, hence, investment and deployment at our end. However, I’ve no doubt that once those standards are agreed and adopted, a whole new raft of technologies will emerge that could potentially usher in a new age of production, whether onsite or remote. But until then – and it may not be too long – we’ll keep a watchful eye.

I anticipate our already busy hire desk will become even busier as broadcasters and production companies leap forward together under a common drive to see UHD and HDR finally come into its own.

We’ve been around since well before HD was the new black. Those blacks will be much richer on the balance sheet when UHD and HDR become mainstream, and we’ll have the kit ready to support any OB with those high standards in mind.